What should homeowners know about bacteria and their private well water systems?

Sources of bacteria in drinking water

Bacteria of greatest concern in drinking water are those that originate from the gut of warm-blooded animals. Sources include wildlife, pets, and livestock on farms or in feedlots. 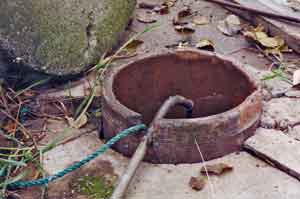 This old well has a cracked casing, allowing contaminants into the drinking water supply.

Contamination problems arise from improperly designed, failing, or overloaded waste water treatment systems, including septic systems from private homes, and leaking sanitary sewer pipes. Human sources are a particular concern as they include bacteria of human origin and may include human pathogens. Floodwater commonly contains high levels of bacteria from numerous sources.

Surface waters typically contain bacteria. Groundwater should be free of those bacteria that arise from animal sources. Proper well design and construction should protect drinking water sources from contamination by surface waters.

The presence of bacteria does not mean the water is unsafe to drink. Only disease-causing bacteria, known as pathogens, lead to disease. Total coliform bacteria is a group of different kinds of bacteria commonly found in the environment, including soil, vegetation and untreated surface water. Total coliform bacteria are generally not harmful. Fecal coliform bacteria are a subgroup of the total coliform group. They exist in great quantities in the intestines and feces of humans and animals. The presence of fecal coliform bacteria in drinking water is a strong indication of recent sewage or animal waste contamination, which should be interpreted as an indication that there is a greater risk that pathogens are present. Microbes in these wastes may cause short-term effects, such as diarrhea, cramps, nausea, headaches or other symptoms, as well as potentially pose long-term health effects. They may pose a special health risk for infants, young children, some of the elderly and people with severely compromised immune systems.

Public water supplies are regulated by the Environmental Protection Agency (EPA). The EPA requires that all public water suppliers regularly test for bacterial contamination and deliver water that meets the EPA standard for total coliform bacteria in drinking water, which is zero total coliform per 100 milliliters of water. Testing for all potential pathogens would be impractical and expensive. Total coliform is used as an indicator of water quality with regard to bacteria because it is commonly found in the environment, reacts in the natural environment and to treatment in a manner similar to many pathogens, and is relatively easy and inexpensive to test for. However, a water sample testing positive for total coliform bacteria is not necessarily unsafe for consumption. A water sample testing positive for fecal coliform bacteria indicates recent fecal contamination, a sign there is a risk that pathogens are present.

Bacterial testing for private water supplies may be provided by certified commercial, city/county health departments and state health department laboratories. Private water supply users can have water tested by a state-certified laboratory. Depending upon the methodology, water test results may be reported as “present or absent” or as a number, to indicate whether or not bacteria was detected.

Options for bacteria in drinking water

The EPA requires that all public water suppliers provide water that meets the EPA standard for bacteria. Public notification is made if bacteria are present. The water supplier must immediately implement steps to provide safe water. The risk of this happening increases with area flooding.

For short-term disinfection of water for drinking and food preparation, bring water to a vigorous rolling boil for one minute, which includes an adequate safety factor. Boiling any longer can concentrate other chemical contaminants that may be present, such as nitrate. Since water boils at a lower temperature as elevation increases, the Centers for Disease Control and Prevention recommends boiling for three minutes at altitudes above 6,562 feet (2,000 meters).

Household chlorine bleach without fragrance or other additives containing between 4 and 6 percent sodium hypochlorite is an option for disinfecting small amounts of water used for dish washing. For clear water, add six drops per gallon of water using a medicine dropper. Very cloudy water should be strained through a clean cloth, and then a larger disinfectant dose of 16 drops per gallon should be added. Stir the water and let it stand covered for 30 minutes. For adequate disinfection, the water should have a light chlorine odor to it after the 30-minute waiting period. If this odor is not present after 30 minutes, repeat the dose and let it stand covered another 15 minutes.

If total coliform and/or E. coli bacteria are detected in a private water supply, an immediate effort should be made to identify and eliminate the source of contamination. After addressing the contamination source, disinfect the entire water system, using shock chlorination. After shock chlorination, submit another water sample for testing. The water should test negative before use.

If the source of bacterial contamination or well construction errors cannot be identified and eliminated, continuous disinfection of the water supply may be necessary. Options include continuous chlorination, ultraviolet radiation, distillation, and ozone treatment.

Manage Cookie Consent
To provide the best experiences, we use technologies like cookies to store and/or access device information. Consenting to these technologies will allow us to process data such as browsing behavior or unique IDs on this site. Not consenting or withdrawing consent, may adversely affect certain features and functions.
Manage options Manage services Manage vendors Read more about these purposes
View preferences
{title} {title} {title}