Volatile Organic Chemicals (VOCs) are a class of chemicals that are carbon-containing and evaporate, or vaporize, easily into air at normal air temperatures. VOCs are found in a variety of commercial, industrial, and residential products, including gasoline, solvents, cleaners and degreasers, paints, inks and dyes, and pesticides. When VOCs are found in the environment it is typically the result of human activity, such as a spill or inappropriate disposal where the chemical has been allowed to soak into the ground. Once released into the environment, VOCs may be carried deeper into an aquifer in the form of a non-aqueous phase liquid (NAPL), evaporating low concentrations of VOCs as it is transported through the subsurface.

[|| Non-aqueous phase liquids] (NAPLs) are volatile organic chemical compounds that don’t readily dissolve in water. An example would be the oil in an oil and vinegar salad dressing. When the NAPL is lighter in density than water, it is called a light-NAPL, or LNAPL. When the NAPL is heavier in density than water, it is called a dense-NAPL, or DNAPL. In the environment, the most common LNAPL contaminant in water would be petroleum products, such as gasoline or diesel. Both the NAPL and volatile phase of the organic chemical in contact with water will result in low concentrations of the chemical dissolving into the water.

Most VOCs can be detected by odor. The only way to know the actual concentration in water is through sampling and testing.

The U.S. Environmental Protection Agency (EPA) estimates that VOCs are present in one-fifth of the nation’s water supplies. They can enter drinking water supplies from a variety of sources. 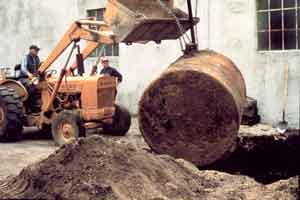 Benzene, for example, may enter groundwater from gasoline or oil spills on the ground surface or from leaking underground fuel tanks. Other examples of commonly detected VOCs are dichloromethane (methylene chloride), an industrial solvent; trichloroethylene, used in septic system cleaners; and tetrachloroethylene (perchloroethylene), used in the dry-cleaning industry. Exposure risk is determined based on the individual constituents of the VOC compound, with each having the potential to trigger different symptoms, human health effects, or illnesses.

The term VOC refers to an organic chemical liquid’s characteristic behavior. VOCs evaporate, or vaporize, easily into air at normal air temperatures and when in contact with water may dissolve in and be transported by water. In addition, dissolved organic chemicals in water may vaporize out of water into the air.

The chemical constituents of the VOC could vary. Gasoline, for example, consists of benzene, toluene, and other hydrocarbons, and each of these will evaporate from water or the original gasoline product. While the quality of water supplied by public water systems is regulated by the Environmental Protection Agency, the EPA does not regulate every potential constituent of VOC compounds. One common constituent, benzene, is regulated with a maximum contaminant level set at 0.005 milligrams per liter (parts per million) and a goal of zero in drinking water.

Testing a private water supply is most often optional. Testing for all potential VOCs is impractical and nearly impossible. Water analysis can be requested if there is reason to suspect the presence of a specific LNAP.

VOCs evaporate, or vaporize easily, into air at normal air temperatures and when in contact with water may dissolve in and be transported by water. In addition, dissolved organic chemicals in water may vaporize out of water into the air. Public community water supplies must provide drinking water that is in compliance with the maximum contaminant levels of each of the regulated chemical constituents within the VOC. Because VOCs in the environment are most likely the result of a release into the environment and are not naturally occurring, the individual chemical constituents within the water contaminated by VOCs must first be determined prior to selection of a treatment option. In most situations, facilities found responsible for the release of VOCs into the environment are prosecuted under our existing state and federal environmental protection laws, and responsible parties are required to implement clean-up strategies to remove the contaminant from the environment.

Manage Cookie Consent
To provide the best experiences, we use technologies like cookies to store and/or access device information. Consenting to these technologies will allow us to process data such as browsing behavior or unique IDs on this site. Not consenting or withdrawing consent, may adversely affect certain features and functions.
Manage options Manage services Manage vendors Read more about these purposes
View preferences
{title} {title} {title}